MAITHUNA is the central axis around which most of the TANTRA YOGA metaphysics turns and it is a frequent topic in religious hindu sculpture and art. Missionaries, people from the occident and even hindu men influenced by the occidental culture regard these works of art to be pornographic and claim that sexual YOGA is a perverted and degraded form of oriental spirituality.

The dominant idea of the MAITHUNA rite and of its TAOIST equivalent is that sexual love can become a profound meditative worship in which the participants become living embodiments of the Divine.

MAITHUNA implies also a transmutation of the sexual energy that is generated, i.e. a trasnformation of its attributes. Nothing is done for generating the sexual energy: it just manifests by itself, without intrusion or compulsion.

It is well known that TANTRA YOGA uses a complex symbolism of the subtle human anatomy. The spinal column represents the axis of life, having its roots in the Underworld and its branches in Heaven. The base of the spinal tree is the site of The Serpent Power, the symbolic image of the divine power (vitality) manifested in Nature and sleeping under the spell of MAYA. Sexual YOGA consist of the awakening of the Serpent and of its controlled ascent from the roots of the spinal tree to the branches. This process defines the spiritual enlightenment and the final liberation of the human Self.

The two partners sit facing each other, the man in full lotus posture (padmasana), the woman sitting in his lap and wrapping her legs around his waist and her arms around his neck in a state of ecstatic surrender. The Tibetan name of this position is YAB-YUM, which means "the Mother-Father". This posture is obviously static: the couple remains motionless and prolongs the embrace so that the energetic exchange is passive and receptive rather than active and demanding. Nothing special is done to arouse the sexual energy: it is permitted to follow its natural flow, without being seized and exploited by the will. However, the mind and the senses are not permitted to jump randomly, but are consciously yet effortlessly directed toward experiencing "that which is" (the immediacy of the present experience).

Both TANTRIC and TAOIST traditions emphasize the necessity for both partners to control and refine the sexual energy (orgasm without ejaculation) and to remain in an undemanding state of mind, not using the discriminating reason but relying on the combined forces of the body, the soul and the spirit as a whole.

For us the importance of these ideas reside less in technical details and more in their psychological value. These ideas represent a highly evolved attitude toward relationship, sexuality and life. If these ideas would be assimilated by the modern civilisation and put to work, they would contribute unexpectedly to clarify our confusions related to marriage and sexuality.

The profound meaning of the sexual YOGA cannot be understood unless we understand the basic principles of TANTRA and TAOISM.

The TAOIST doctrine is based upon the idea of non-interference (WU-WEI) with TAO (the flow of Nature). It is "man-in-profound-and-conscious-relationship-with-his-environment". This vision opens the senses and thus reveals the contemplative side of the sexual experience. This is called dhyana in TANTRA. Both TANTRIC YOGA and TAOIST YOGA stress the importance of controlling the breathing, because the rhythm of breathing determines the expansion of perception. The crucial importance of breathing is one of the important keys for understanding this approach.

The perfect control of breathing (pranayama) is attained when its rhythm is spontaneously stopped without resulting in the dissappearance of life. This is done by letting the breath flow in and out freely, without any interference, but with a keen and continuous awareness of the process. The breath starts to slow down to such a degree that the movements of inhalation and exhalation are almost imperceptible: the breathing seems to be imobilized. The way we breathe defines the way we experience and live our lifes. This imperceptible, immobile breathing defines a non-capturing attitude towards life (WU-WEI), a detached non-action in the sense this term is defined in Bhagavat Gita: action with no ego-involvement. The imobilisation of breathing leads to the dissapearance of the mind-patterns (VRTTI-S), which leads to the imobilisation of the orgasm. Yet the meaningful idea both for breathing and for orgasm is not "imobilisation", but "not being aware of" (in the sense of being totally effortless). Just as the contemplation of breathing slows it down almost to immobility, the contemplation of lovemaking slows it down up to suspending it into an endless orgasm.

The slowing down of the body processes have no value in themselves: they are just the outer sign of the disappearance of "ego", the ego, which forces and pushes the pleasure instead of letting it take its natural course. The orgasm is spontaneous when it happens by itself, in its time, and when the body movement is dictated by a need to "respond" rather than to "demand." The active sexual intercourse is just an imperfect imitation of what should happen by itself in an attitude of non-interference.

From the contemplation point of view the sexual love is a revelation. Long before orgasm, the sexual upsurge manifests as a psychic exchange of warm love that radiates between the partners. This warmth is so powerful that they feel as if they would ecstatically melt into each other. Thus, the sexual appetite transforms itself into the most tender and respectful love that can be imagined.

In our civilisation, sexuality is way below its potential 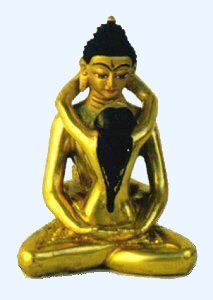 The contemplative sexuality makes it possible to spontaneously perceive our relationship with the Universe. The actual "technique" of lovemaking is not primarily important, because here there is no result to attain. In this approach, man and woman are spontaneously on the path of self-discovery, without judging or expecting anything in advance, but living passionately that which exists in the moment. In our era of high speed, the only technical request is to have enough time, or, better to say, to take enough time. By this, is not only meant the time that is measured in seconds, hours, days, etc., but chiefly a psychic attribute (which could be called a degree of excellence) that allows events to happen in their own time, an inner rhythm that defines a no-hurry attitude. This is a fundamentally essential attitude without which spirituality is impossible.
The usual approach to sexuality is a hurried, forced event, in which woman's orgasm is relatively rare and man's ejaculation is speeded up by premature movements. The TANTRIC and TAOIST modality of non-interference or no-ego-involvement allows an endless exchange of love and delays the male ejaculation to the point of dissapearance. This approach is much easier for women, due to their basically passive, receptive nature. But once man gets used to this spiritual approach of sexuality, he can prolong the lovemaking indefinitely in time, offering to his woman the greatest possible degree of satisfaction and fulfillment together with a very quick and profound path of self-discovery and enlightenment.

One of the first steps of the contemplative sexuality is the discovery of the profoundity and pleasure of the most simple contacts, which are generaly considered either as having little to do with the sexual act or as being preliminary to it. It is, for example, discovering the beauty of seeing your loved one, of touching him or her, of listening to his or her voice. There is one condition though: do not expect these contacts to lead to anything, do not force them to lead to anything but let them follow their natural course and stay in a state of detached expectancy.

Thus received, the outer and the inner world become charged with an incredible intensity of life, and we perceive ourselves as containing, to a certain degree, the outer reality reflected in our inner world.

Psychic lovemaking implies the careful discovery of your loved one

The idea of contemplative sexuality is found in Japan in the tea ceremony. This ceremony, which has its roots in the practice of ZEN, asociates the metaphysical ecstasy with the social fact of drinking tea with a few good friends. During the tea ceremony, the most important activity is the continuous act of contemplation - all the rest being secondary from the very beginning and somehow unimportant. If this fact is not understood, the tea ceremony risks to become a refined snobbishness without any spiritual significance, just as the contemplative lovemaking without the understanding of the doctrine of non-interference may become a refined art of prolonging the sexual act and enhancing the pleasure, but without much spiritual value.

It is a pity that the majority of those who start the practice of TANTRA (and even many of those who consider themselves advanced) think of it as a skill which will be attained by practicing certain techniques. There is nothing to attain! There is no effort, no goal, no path. The only thing that might require some effort is to give up, to unlearn our prejudices about sexuality. After this has been done, TANTRA is what remains.

The difficulty lies in the fact that the 'education' we receive teaches us so efficiently to disguise our thoughts under a conventional form that this process ends up by being a second nature. The 'true talk' has nothing to do with hurting your partner with frankness, which is a selfish and rude attitude just like the agressive approach of sexuality.

It is significant that human beings which help us to express ourselves freely are those beings which make us feel fulfilled, because with these beings we do not need the ego in order to feel secure.

In contemplative sexuality we cannot speak of 'sexual act'

The term 'sexual act' in its usual sense is not proper for it defines a limited area of experience and we have seen from above that in contemplative sexuality this area encompasses the whole Universe. Moreover, the term 'act' implies an active involvement, whereas in contemplative sexuality the whole point is to engage in an inactive, no-goal-oriented event. When the proximity between the two lovers is such that their sexual organs touch each other, it is enough for them to relax and stay motionless, and at some point in time the penis will be absorbed rather than thrusted into the vagina. By doing nothing to unleash anything, the two lovers intertwine themselves with the process (stay with the act). The feeling of identity between them intensifies; moreover, a new relational being is born. Because of this new entity, the two lovers transcend their limitations and are carried by a wave of bliss which is neither 'mine' nor 'yours' and not even 'ours': it is cosmical, impersonal, limitless.

The permanent obsession to reach ejaculatory orgasm poisons the sexual love. The permanent obsession to reach cosmic bliss poisons the contemplative sexuality. If the couple is free from any concern regarding the attainment or non-attainment of orgasm or cosmic bliss, any love play is possible, even the most active one. By this it is not meant using certain techniques, but responding spontaneously to the moment.

Thus experienced, sexuality reveals the intrinsic unity of physical and spiritual. It would be ridiculous to ascribe a certain duration to the contemplative sexuality. Its atemporal atribute is a result of the total absence of any intention or hurry. The final bliss comes in its time, because it is DIVINE GRACE, not human work. The essential thing here is a total abandonment, which starts the process of re-unification with the Divine. We come now to the true sense of the word RELIGION: RE-LIGERE, i.e., re-unification, re-link. What the two partners feel for each other can be very well defined by the term 'religious adoration'. The fulfillment of the sexual love in a state of humbleness leads to transfiguration: then the everyday world reveals itself as being identical with the spiritual world.


You can find this article on the internet also here